Know as the world game, football is played throughout the majority of Waikato Secondary Schools. It is very popular and accessible game for both boys and  girls. Secondary school leagues run through out the two winter terms, term 2 and 3. The season consists of grading , league and knockout competitions and concludes with the very successful 5 a-side one day tournament.

This form of football is one of the fastest growing in popularity and participation with our youth. Generally played indoors it’s an extremely fast paced and skill based game in a five a-side format. School leagues and tournament are proving strong growth points. It tends to be the off-season [summer] game for school players with the national schools tournament held in March. 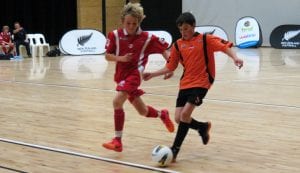