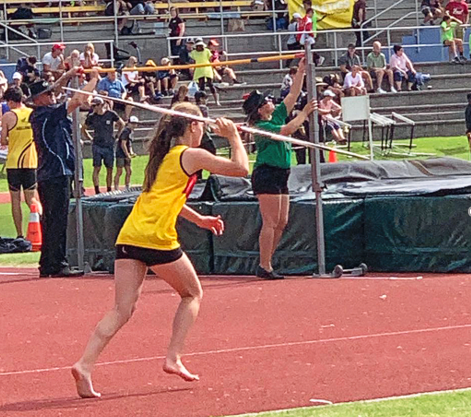 Posted at 14:27h in Athletics, News by Tony Rogers

14 year-old Sally has exceeded all expectations of a young girl from Whitianga. Her natural talent is clear as she continues to excel without specific training and knowledge around technique.  Sally has explained that she doesn’t need expensive equipment and coaching to do well, but will succeed through her determination for the sport.

“I’m actually more comfortable throwing the javelin without shoes and I don’t worry or care about what my competitors have that I don’t. In fact, I think it works to my advantage at times, as those competitors who have the best of everything can feel a little bit under pressure to beat me.”

In a short space of time, Sally has gone on to not only win, but rewrite the record books at a host of different athletics meetings. This year Sally not only won the javelin, but broke the school record with a throw of 27 metres. Salley then went on to attend the Thames Valley athletics meeting that was held in Waihi. Sally extended her best javelin throwing distance out to 29.79m, when she took out first place in her age group, breaking the old record – which had stood since 1984 – by an impressive 2m. This gained her a place at the Waikato athletics meeting in Hamilton later in March, where she won her age group and earned selection for the Waikato/Bay of Plenty team to compete at the North Island Secondary School Athletics Championships which were held in Tauranga in April.

In addition to her winning streak continuing in Tauranga against the best in the North Island, Sally was able to increase her best throw out to 30.46m. The next big event where Sally will compete will be the New Zealand Championships in Wellington in December, where she will come up against the best in the country in her Junior Girls age group.

To help improve her technique, Sally is spending some time with Mercury Bay Area School teacher, Andy Henley, who is a former competitive athlete. Other than this, Sally and Jeff are studying YouTube footage about the finer points of javelin throwing. They also use a block of empty land behind their home for Sally to practice on.